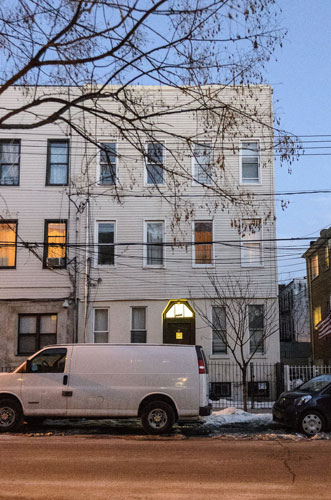 Battleground: The Bushwick apartment building where landlord Aron Stark tried and failed to evict its one rent-stabilized tenant.
Photo by Stefano Giovannini

The brother of a murdered Williamsburg landlord may have grown fat off government money meant for those who cannot afford Brooklyn’s skyrocketing rents, and the proof appears to have surfaced while he was trying to evict a low-rent tenant in white-hot Bushwick.

Aron “Al” Stark spent nearly two years trying to evict a rent-stabilized renter in Bushwick, but it backfired this January when, after a three-day trial, Judge Marcia Sikowitz nixed the eviction and called him “not a credible witness,” saying he had lied in a dizzying array of statements to the court, misrepresenting things as basic as his address and his children’s ages, as well as his years living on public-housing money while raking in income from four rental properties. The city’s Department of Investigation is now looking into the possible fraud revealed in court, according to a New York City Housing Authority spokeswoman.

Stark collected tens of thousands of taxpayer dollars in Section 8 vouchers, rent subsidies that allow poor people to rent private apartments, and had the city Housing Authority send them to his associate at an upstate house owned by his relative, Bushwick tenant Judtih Fringo’s attorney found. The judge agreed, and the lawyer said evidence of the scheme destroyed any chance he had of evicting Fringo, a hairstylist and mother of two, from her apartment of 12 years.

“We got kind of lucky in this case in discovering the Section 8 violations, which blew up his credibility,” said Sarah Robinson, a lawyer with the Legal Aid Society.

The saga began in March, 2013 when Stark told Fringo he wouldn’t renew her lease, saying he wanted to move in — one of the few ways landlords can get rent-stabilized tenants out without the tenant doing something wrong.

During the trial, many problems emerged in Stark’s story. The judge cites the following:

• Stark said he wanted to move his two kids in and send them to Brooklyn schools, but he is divorced and the kids live with his ex-wife in Rockland County. He has made no effort to get custody of them.

• The apartment is a railroad-style two-bedroom, and Stark hasn’t taken any steps to figure out what it would take to turn into a three-bedroom with a hallway, as he said he planned. When asked why his offspring could not live on the first or third floor, Stark testified that the first floor could be burglarized and the third floor is too much of a climb.

• Stark claimed that he had lived in the basement of Fringo’s building for two years leading up to the eviction attempt and couldn’t afford anywhere else. In fact, he listed his address on Heyward Street in Williamsburg on mortgage documents as late as December, 2013.

• From late 2001 to July, 2013, Stark collected Section 8 on Heyward Street, paying as little as $46 per month in rent to Judah Schlessinger through November, 2012, according to a New York City Housing Authority official’s testimony. Stark said he knew Schlessinger from a synagogue in Monsey, New York.

• On a Section 8 form filled out in 2012, when his rent was $1,386 and he was paying $175 out of pocket, Stark listed his annual income as $5,200 and told housing officials he had no real estate interests, despite his having acquired three rental properties in Bushwick in 2007, and a fourth, the Greene Avenue building, in 2008.

• For a time period unspecified in the judge’s ruling, Stark collected Section 8 for a second apartment, in Manhattan.

• On a $1.1-million mortgage for two of his rental buildings, he listed the Monsey, New York address. When asked why he was getting mail there rather than in Brooklyn, he said the upstate address was “safe,” whereas getting mail in New York City is not, a rationale the judge wrote “makes no sense.”

• Stark testified that, though he had once listed the Monsey house as his primary address, he had only spent summers there following his divorce. He said the house is now owned by Ignat Stark, a relative who he claims to have never met.

Stark’s attorney has filed a motion leaving open the possibility of an appeal, meaning he could renew his push to evict Fringo within the next year. His lawyer disputed the judge’s ruling but declined to address specific questions about his actions.

“We respectfully disagree with the conclusions of the judge and we are considering all of our options,” Ronete Koop said.

This is not the first time a Stark has been in the public eye.

Stark’s brother, Menachem “Max” Stark, was kidnapped outside of his Williamsburg office, murdered, and found burned in a dumpster on Long Island in early January, 2014. In the days following his death, details came out of his large debts and grim conditions at his Brooklyn rental properties. Police have arrested a man and charged him with kidnapping and murder in connection with the killing. He has pleaded not guilty.

A man who answered Stark’s cellphone and identified himself as his business partner said that Stark was in Argentina until the late summer and that he could not be reached. Stark did not respond to a request for comment made through Facebook. Stark quarters: The Williamsburg apartment building where landlord Aron Stark collected public housing money meant for the poor for 12 years, six of those as a landlord, according to court filings.
Photo by Stefano Giovannini