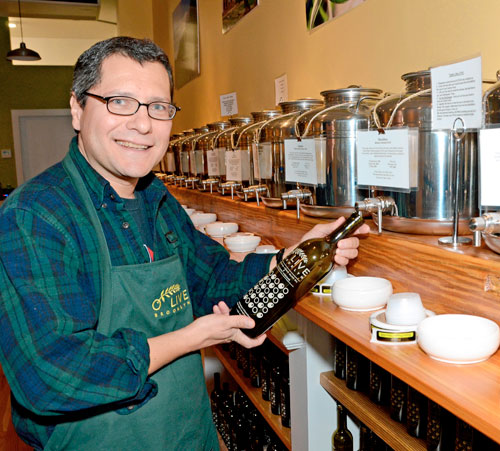 You know you prefer a Pinot Grigio to a Chardonnay, but do you know your favorite varietal of olive oil?

A new olive oil shop O Live Brooklyn has bottles lining its shelves and sitting in crates like a liquor store, and the owner hopes enthusiasts will be talking about extra virgins like they would a single malt or an old Bordeaux.

Tasting olive oils is reminiscent of wine tasting as well.

Shoppers interested in sampling should first hold a sample cup between their hands to warm it and release the full flavor. After a smell, they should sip the olive oil through their teeth with plenty of air — just like tasting a fine wine.

Flavor notes range from smooth, clean and mellow to grassy, pungent and even spicy.

But flavor isn’t the only consideration.

The so-called FFA count, Bernarducci says, denotes the “free fatty acids” in an olive oil, and is one of the many markers of a specific oil’s acidity and freshness.

Country of origin and crush date are just a few of the other considerations to keep in mind when picking out the right olive oil — perhaps this season’s Frantoio from Chile, an oil with a remarkably olive-like flavor.

While other olive oil stores have been popping up across the country for a few years now, Bernaducci hopes his 12 varietals of extra virgin olive oils and 11 infused olive oils will have Brooklynites thinking twice before just picking up any old bottle of the stuff.

With rotating, seasonal selections from countries as far as Chile and Australia, there’s no shortage of options.

Plus, he sells balsamic vinegar and other oils as well.

“Once people come and taste, they really like it,” he says.