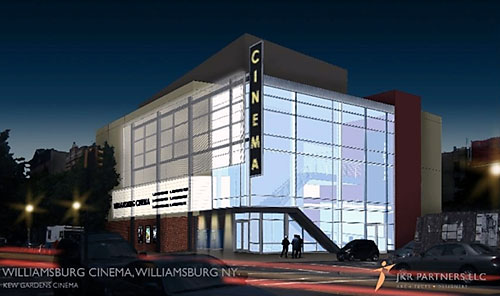 A six-screen indie moviehouse is slated to rise on the corner of Driggs Avenue and Grand Street in Williamsburg.
JKR Partners

Williamsburg residents won’t have to take the L train to Union Square to catch the latest blockbuster.

Developer Blue Zees Real Estate has joined forces with the owner of the Cobble Hill Cinema to move forward on a $9.3-million moviehouse on a vacant lot at the corner Driggs Avenue and Grand Street with seven screens and 900 stadium seats.

The three-story theater will show first-run feature films, and should be completed by next fall.

The company bought the $3-million site in May, but has begun notifying nearby movie theaters of its plans this month. Calls made to the development company were not returned.

The theater is the third movie house planned for the neighborhood and Williamsburg’s first multi-screen theater since the iconic Commodore was closed and subsequently demolished in 2002.

In June, the 93-seat IndieScreen Cinema opened on Kent Avenue at Metropolitan Avenue just in time to host the Brooklyn International Film Festival.

And the closely tracked nearly built Cassandra Cinema occupying the first floor of a condo building on Metropolitan Avenue at Kent Avenue was poised to make its dramatic debut this fall, but its owners sold the condo to another developer and it won’t open until 2011.

Anticipation for new movie theaters in Williamsburg has been feverish but several Grand Street residents said that they were fed up with late-night noise from new bars between Grand Street and Metropolitan Avenue.

But Community Board 1 member Ward Dennis said that the neighborhood would likely welcome the project because Williamsburg was “starved” for a movie theater. And Margaret Kozlowska of Margo’s Patisserie Café on Driggs Avenue supports it for obvious reasons.

“A movie theater on that corner is better than an empty lot,” said Kozlowska. “And maybe [filmgoers] could come here for a coffee or a snack.”

Alyssa Key of the clothing store Love Brigade agrees, saying that the theater will be a “great addition” to Grand Street.

“It will bring not only foot traffic to a street filled with cool shops and bars, but also excitement and great energy,” said Key. “My only concern would be that Grand would convert to metered street parking.”