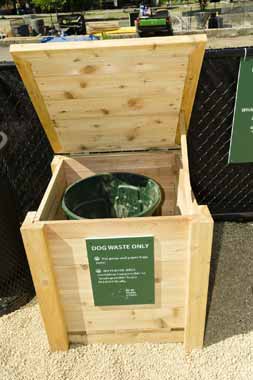 State park honchos want Williamsburg dog owners to get their s— together.

The officials are asking users of the new dog run in East River State Park to ditch plastic poop bags and instead shovel their hounds’ excrement into a compost bin to become fertilizer for the park’s plants — and they say the area’s open-minded residents are enthusiastic about taking the fecal matter into their own hands.

“People in the neighborhood were really receptive,” said Leslie Wright, the regional director of state parks in New York City, who cut the ribbon on the new pooch playground on Thursday. “It’s a really savvy, really progressive community.”

The canine-crap composting system is the first of its kind in any New York public park, according to Wright, but was inspired by similar setups in parks in Alaska and Canada — and many people are already doing it at home in their backyards, she said.

Instead of collecting their pets’ poop into plastic bags, park-goers use provided scoops or biodegradable paper bags to collect the offending ordure, and deposit it into one large bucket.

Park workers will periodically add untreated sawdust to the turd receptacle — housed inside a tasteful cedar box — which creates a chemical reaction that kills the doggie dung’s odor and helps it degrade, according to Wright.

They will also empty the bin when it gets too full, moving the mix to a separate container to “cure and cook” before they spread it on gardens elsewhere in the park, she said.

Visitors will still have the number two option of using plastic bags and throwing it away separately as they normally do, but early users say they’re on board with the new movement — both to save the planet and to save money on bags.

“It might take a little bit of getting used to, but I think people will use the pooper scooper,” said Williamsburger Lica Rodriguez, who came to the run’s opening with husband Juan and their dog Gemma, and had a chance to test out the new doodie dumpster. “It’s less money on the dog owner, it’s less bags.”

In addition to the refuse recycling system, the new dog run also has two automatic water fountains for pups to drink from, climbing rocks, shaded seating for owners, and separate play areas for big and small pooches.

Residents in the booming, park-starved neighborhood have been pushing for the new off-leash space for years, after becoming fed up with the increasingly overcrowded conditions at McCarren Park’s run.

Councilman Steve Levin (D–Williamsburg) earmarked $450,000 from his coffers for the project back in 2013 and Albany agreed to kick in $250,000, but the project hit a snag last year when officials realized dogs aren’t actually allowed in state parks. They eventually compromised by placing the entrance in neighboring city-run Bushwick Inlet Park.

Rodriguez says the final result is smaller than McCarren’s — and it will probably be a year before the surrounding vegetation grows to provide more shade and sound protection — but it is still a very welcome addition for dog owners like herself who live in one of the many new waterfront apartment and condo buildings nearby.

“It’s certainly large enough for these apartment dogs,” she said. “It’s more for the dogs to stretch their legs and enjoy social time with other dogs in a safe environment without having to worry about other dogs.” Cutting the crap: Park workers cover the dog poop in sawdust, which helps is break down and conceals the odor.
Photo by Stefano Giovannini Dig in!: The park has an ample supply of poop scoops.
Photo by Stefano Giovannini Civic engagement: This dog was enthralled by politicians and state officials cutting the ribbon on the new dog park.
Photo by Stefano Giovannini Top of the rock: Williamsburg resident Juan Rodriguez and his dog Gemma test the park’s facilities.
Photo by Stefano Giovannini All creatures great and small: A tiny dog wearing an even tinier bow gets in on the action as officials — including State Parks rep Leslie Wright (Center), Assemblyman Joe Lentol (second from right), and Councilman Stephen Levin (far right) — cut the ribbon on the new run.
Photo by Stefano Giovannini